Home About Us History

Riverview was established on August 8, 1887, originally known as Antioch Baptist Church. Two deacons were chosen, and a Sunday School was organized. Offerings were usually one cent each.

On August 3, 1902, Antioch was changed to Riverview. This seemed appropriate because the church was located on Horseshoe Bend Road about two miles from U.S. Highway 54, high on the bluff overlooking the Osage River Valley. This valley would eventually become the Lake of the Ozarks. The Riverview Cemetery is still located on Horseshoe Bend Parkway, across the road from where the church was originally located.

In the period between 1906 and 1930, the church continued to grow in membership. A strong Sunday School was maintained, and in the late 1920s a BYPU was organized. Riverview was known as a “Singing Church.” Approximately 253 individuals were members at Riverview by the time Bagnell Dam was built. 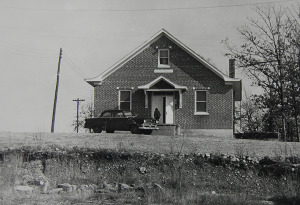 In the late 1920s and early 1930s, many Horseshoe Bend residents were relocated because of the Bagnell Dam construction. When Union Electric initially offered to buy the land where the church was located, a congregational vote to sell and relocate was defeated on September 20, 1931. Finally, on April 16, 1932, the church voted to sell its property for $4,000, resulting in the election of a building committee. The present location (two acres) was then purchased for $50 per acre. The committee provided plans for a 32-foot by 40-foot brick building; the church voted to build, and the contractor was paid 50 cents per hour. Behind the building a cemetery plot was established; a listing of those interred can be found at the website http://www.rootsweb.com/~momiller/riverview_church_cemetery.html

In 1945, a parsonage was built. A basement was added to the church in the late 1940s and in 1950, an education building was constructed. The present auditorium and other improvements were completed in 1964; the original brick building was removed. Additional classrooms and a fellowship hall were added in 1981. In 1994, the church built a new addition that included a multipurpose room, kitchen area, and more classrooms. Since 1932, Riverview has had 17 pastors.